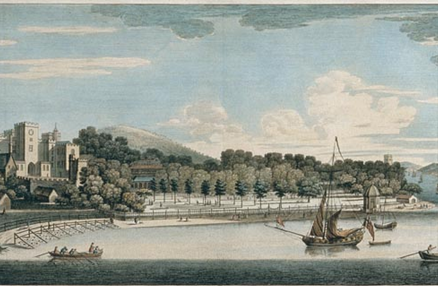 Powderham-castle was William’s main home until he left England in 1811. He never returned before his death in 1835 but, during this long period of exile in the United States of America and France, he retained a strong and detailed interest in the castle and its grounds.

By William’s time the castle was already an ancient building that had been altered and extended by one generation of Courtenays after another. Many of the contemporary descriptions quoted here included passages about the earlier history of both the family and their castle, but most of those have been omitted. Today the castle is still the Courtenays’ family home but is open to visitors for much of the year.

Four men held the castle within the period 1755-1855, all named William Courtenay:

The earliest text in the three pages William’s homes: Powderham 2, 3 and 4 dates from 1760, a few years before William was born and in the lifetime of both his Courtenay grandparents. The last is from 1852 by which time the South Devon Railway had been open for a few years, passing between the castle and the estuary of the Exe. Some 60 excerpts have been included, arranged as follows:

Images (from the top)